Skip to content
You are here:Home-Uncategorized-Kerry James Marshall Painting Goes For Nearly $18.5 Million at Sotheby’s, Second-Highest Price at Auction for a Work by a Living African American Artist

Kerry James Marshall Painting Goes For Nearly $18.5 Million at Sotheby’s, Second-Highest Price at Auction for a Work by a Living African American Artist

AN IMAGE OF BLACK LOVE by Kerry James Marshall was highly sought this week. Nearly six-feet tall, “Vignette 19” (2014) depicts three couples captured in a park-like vignette framed with strokes of pink and a glittery heart. Offered at Sotheby’s Contemporary Art Evening Auction on Nov. 14 in New York, the painting was expected to reach $6.5 million-$7.5 million. It sold for $18,488,000 (fees are included in all prices cited), more than twice the high estimate.

The price is historic, the second-highest ever paid at auction for a work by a living Africa American artist. The record is held by another Marshall painting, “Past Times” (1997) which sold for $21.1 million in May 2018. “Vignette 19” surpassed by Mark Bradford’s monumental painting “Helter Skelter I” (2007), which was previously the second-most expensive having sold for $11,977,943 in March 2018 at Phillips London. 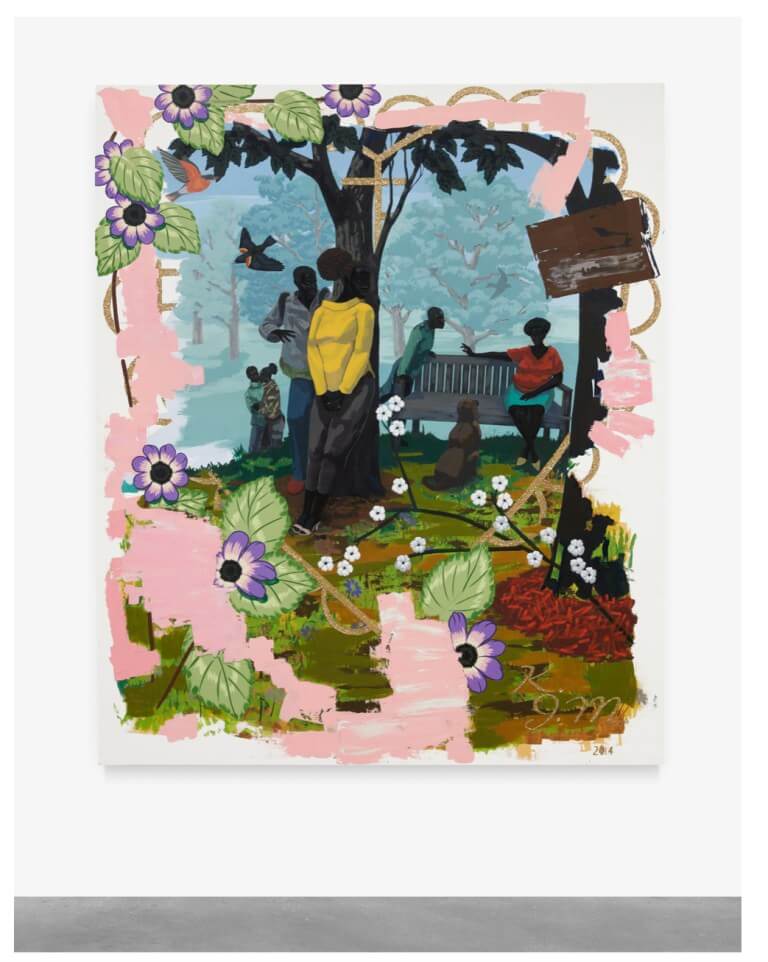 Marshall’s ongoing series Vignettes, based on Jean-Honoré Fragonard’s late-eighteenth-century series The Progress of Love, borrows the conceit of the vignette, an ornamental or pictorial device used in book publishing during the French rococo period. The rococo emerged in early eighteenth-century France and embraced the florid, the fecund, and the festooned, deploying images culled from daily life as a challenge to the rigidity of the French academies. Focusing on romantic love, freed from the moralizing of traditional genre scenes or the political and financial arrangements that structured aristocratic marriage, rococo paintings created a space of fantasy in which amorous bliss came to be associated with individual freedom. Marshall’s Vignette paintings deploy the irreverent, decorative spirit of the rococo as a strategy for imaging quotidian black love, a nearly invisible category in the canon of Western painting.

Winograd adds: “The Vignettes are part of Marshall’s ongoing effort to create narrative paintings that eschew images of the black figure contending with violence or trauma in favor of an almost Rockwellian normalcy, defying expectations to create a new sense of black domesticity.”

“Marshall’s Vignette paintings deploy the irreverent, decorative spirit of the rococo as a strategy for imaging quotidian black love, a nearly invisible category in the canon of Western painting.” — Abigail Winograd

The Sotheby’s auction featured 50 lots and totaled $270.6 million. Among the top lots, “Vignette 19” yielded the fourth-highest result. The sale opened with “Ye Shall Inherit the Earth” (1953), a record-setting drawing by Charles White (1918-1979) that garnered $1.76 million. Later in the sale, “Ritual” (1962) by Norman Lewis (1909-1979) also set a new artist record, reaching $2.74 million. Both White and Lewis shattered their previous records and it was the first time the 20th century artists were represented in the evening auction, a marquee sale dedicated to premium works of art.

READ MORE about recent developments regarding resale royalties in France